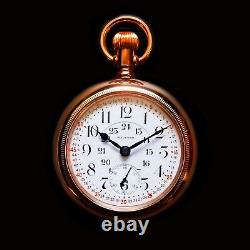 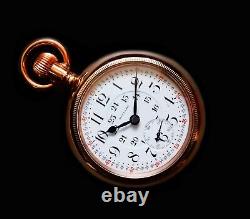 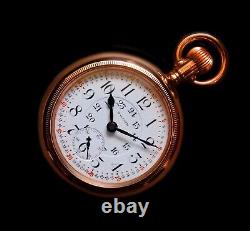 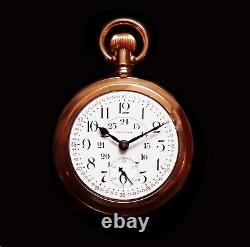 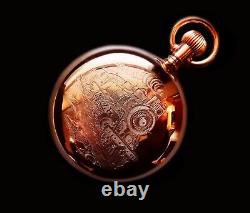 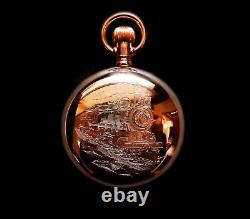 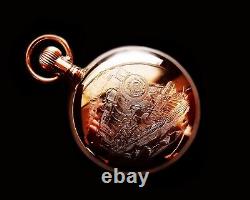 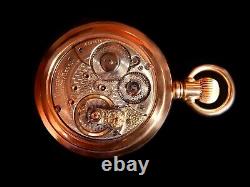 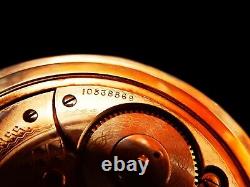 Up for sale is a Rare, Beautiful Antique Waltham Vanguard 23J. In Amazing, Crisp, Beautifully Engraved with Locomotive Rose Gold Plated Case. The movement has a serial number.

It to be manufactured in 1901. The Original Canadian 24-Hour Double Sunk Glass Enamel Dial, Hands and Glass. Crystals are in immaculate mint condition - please see the pictures.

The Case is in Excellent Crisp Mint condition. The Watch size is 18 with 23 Ruby Jewels in Gold settings, Gold Train, Gold balance screws. It's Stem Wind and Lever set. The watch was recently serviced, running STRONG and keeping an excellent accurate time. Please look closely at the pictures as they part of the description.

The company was founded by David Davis, Aaron Dennison, and Edward Howard. Their vision was to form a watch company that could produce high-quality watches at a lower cost using interchangeable parts.

With financial backing from Samuel Curtis, of small-arms manufacturing fame, the watch production began in 1851, and the first small group of watches were finished in late 1852. The first watches produced went to officials of the company, and it was not until 1853 that the first watches were offered for sale to the public. Problems were encountered with the new production methods.

The company was exploring innovative new ideas in watch manufacturing, such as using jewels, making enamel dials, and producing plates with a high-level of finish which required extensive tooling and resulted in a great financial burden. They also found that even though they were using interchangeable parts, each watch was still unique and had its own set of errors to be corrected. It took months to adjust the watches to the point where they were any better than other widely available timepieces. Customer Department at the Waltham Watch Company. In 1853, the factory building was completed and the company began doing business under the name American Horologe Company.

" The name was changed to "Boston Watch Company in September 1853, and the factory in Waltham, Massachusetts was built in October 1854. The movements produced here (serial numbers 1001 - 5000) were signed "Dennison, Howard, & Davis, " C.

The company went through a series of financial reorganizations and renaming over the next decades. It was reorganized as Tracy, Baker & Co. " and later that same year the name was again changed to "Appleton, Tracy & Co and watches 5001 - 14,000 were produced. The first movements carried the Appleton, Tracy & Co. Waltham During the Civil War Years.

In January, 1859 the Waltham Improvement Co. And the Appleton, Tracy & Co.

Merged to form the American Watch Company. The dial department of the Waltham Watch factory. In 1860, as Abraham Lincoln was elected President and the country found itself in the throes of the Civil War, the American Watch Company was faced with serious financial problems. By 1861, business had come to a standstill and bankruptcy seemed inevitable.

The factory was kept in operation through these years by cutting expenses to the lowest possible level... A strategy that proved successful. According to the biography by Carl Sandburg, Abraham Lincoln owned and carried a Waltham Wm.

Bacon, Church, Dennison, Fogg, Howard, Marsh, Webster, and Woerd all contributed greatly to American watchmaking. Waltham continued to manufacture watches (and clocks) until 1957, when they ceased production and became the Waltham Precision Instrument Company. Several of the original Waltham factory buildings are still standing, and were added to the National Register of Historic Places in 1989. In addition to using grade numbers, Waltham also used many grade names on their watches, often choosing the names of Board members, company investors, or other prominent individuals. The grade name basically designates the model and/or level of finish of the watch.